Spring in the Highlands 2019

The first of the May tours started with a visit to Nairn and the east harbour and jetty. Despite the cool northerly airflow a scan of offshore waters revealed Great Cormorant, Common Eider and Long-tailed Ducks the latter being in breeding plumage. A check of birds on the river added Mute Swan, Goosander, Red-breasted Merganser, Grey Wagtail and Sand Martins hawking for insects. I decided to heard towards Portsoy which is just in Aberdeenshire where the harbour offers good views into the North Sea. Offshore we had close views of Northern Gannets, Northern Fulmar, Black-legged Kittiwake, Razorbill and at least two Manx Shearwaters. A short stop at Sandend added little of note so Loch Spynie was next on the agenda. Around the car park European Robin, Blue Tit and Chaffinch, in the open areas with trees we had views of Willow Warbler, Common Chiffchaff, Common Whitethroat, Blackcap, Great Spotted Woodpecker and Dunnock. On reaching the hide overlooking Loch Spynie a few waterbirds were present including Little Grebe, Common Shelduck, Gadwall, Northern Shoveler, Mallard, Eurasian Wigeon and dozens of Common, Black-headed and Herring Gulls. Lossiemouth is a short distance away with the east beach being attractive to Lesser Black-backed Gulls and Sandwich Terns. On the way home a visit to Burghead was good for Great Northern and Red-throated Divers. Back to the Black Isle our base for the week.
Mammals: Roe Deer (5), Red Squirrel (1)

Today I headed west towards the wild and sparsely populated area of Wester Ross. En route I passed the Osprey nest built on a pylon with an Osprey perched nearby. At Achnahalt a view into the loch gave us views of Eurasian Teal, Canada Goose, Common Sandpiper, Common Redshank and feeding Sand Martins. At the village of Achnasheen I visited another loch with Red-throated Diver, Red-breasted Merganser, Wood Sandpiper and Greenshank present. Luck was with us as a Golden Eagle drifted past on the opposite hillside. On to Kinlochewe with its trees and gardens an attractive place for birds. Common Chiffchaff, Lesser Redpoll, Eurasian Siskin, European Greenfinch, European Goldfinch and a calling Common Cuckoo being present. Our journey took us to Gairloch with the beach having Ringed Plover and Common Scoter offshore. Loch Ewe is always productive and on this occasion was no different with the upper waters holding Great Northern Divers. Lunch was taken at the old campground with views into the outer loch. This was productive for Northern Gannet, Arctic Tern, Great Skua, Whimbrel, various gulls including Great Black-backed and Razorbills. Another diversion to Mellon Charles for the long-staying Blue-winged Teal and a female Northern Shoveler. At Laide we finally caught up with Black Guillemot and White Wagtails on the rocks. The finale was to come with two White-tailed Eagles near Gruinard Island a former area for this species.
Mammals: Roe Deer (1), Red Deer (C), Pine Marten (1), Brown Hare (1), Harbour Porpoise (3), Grey Seal (C) 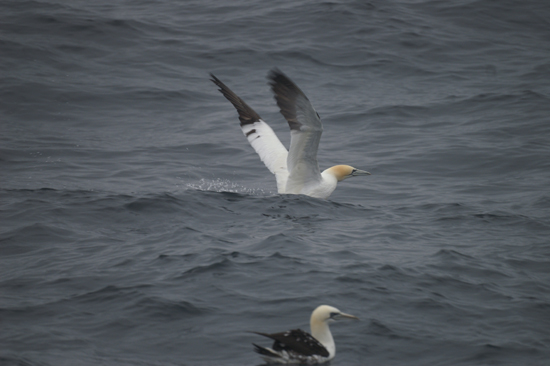 Today we headed north towards the vast expanse of Sutherland and Caithness. On entering Helmsdale I turned north towards the flow country of Forsinard. This area which is literally a flowing bog is difficult to access so most birding is done from the road. Beyond the station European Golden Plover, Mistle Thrush and European Stonechat were seen plus a pair of Hen Harriers which were a welcome site as they patrolled and hunted the forest edge. On reaching the north coast I turned east towards Thurso with a visit to Sandside Bay. On the rocks we added the scarce Purple Sandpiper, Ruddy Turnstone, Common Eider and Rock Pipit. Along the shore a mix of White and Pied Wagtails. A short detour to Scrabster Harbour was good for Black Guillemot. After passing through Thurso lunch was taken at Dunnet Bay always a good spot for birds. On this occasion Great Northern Diver, Long-tailed Duck, Great and Arctic Skuas, Northern Gannet and Grey Wagtail were recorded. St John's Loch held Mute Swan, Tufted Duck and Mallard. St John's Pool is close by where we had sightings of Sandwich Tern, Northern Shoveler, Gadwall and a pair of Common Redshanks. Dunnet Head is the most northerly point in mainland Britain and an important area for breeding seabirds. From the viewing point the group watched Northern Gannet, Northern Fulmar, Razorbill, Common Guillemot and Atlantic Puffins. It was time to head westwards to our base in Durness with the route passing through several small villages set among stunning scenery. A stop at Bettyhill added Greenshank and Common Sandpiper to the day list. After dinner at Durness we set off to views the pools at Balnakiel. On this occasion it was quieter with sightings of Whooper Swan, Whimbrel, Wood Sandpiper and a singing Sedge Warbler.
Mammals: Red Deer (6), Grey Seal (1), Pine Marten (1), Common Otter (2), Common Rabbit (C)

The usual birds were around in Balnakiel Bay and Durness village with the sheltered bay holding Red-throated and Great Northern Divers, Sandwich Tern and Razorbill. By the cemetery walls a pair of Rock Pipits were nesting and calling. A return visit to the pools had similar birds to last night plus a skein of migrating Pink-footed Geese. It was time to head towards Handa an offshore island holding substantial numbers of seabirds. On arrival the short boat crossing allowed us close views of Black Guillemot. After a short introduction talk about the island we set off towards the cliffs. Along the path and boardwalk we encountered several pairs of Great Skua, Arctic Skua, a very obliging Red Grouse and displaying Common Snipe. The cliffs had lots of auks and nesting Northern Fulmars and Black-legged Kittiwakes. Returned to the quay and mainland and headed south towards Ullapool. Along the way a stop for Black-throated Divers on a lochan. Near an area of cliffs we were lucky to find a Peregrine Falcon and a Golden Eagle in close proximity which eventually led to a short foray. Back to the Black Isle via Ullapool where nothing of note was recorded apart from recently arrived Lesser Black-backed Gulls.
Mammals: Red Deer (C), Common Rabbit (C) 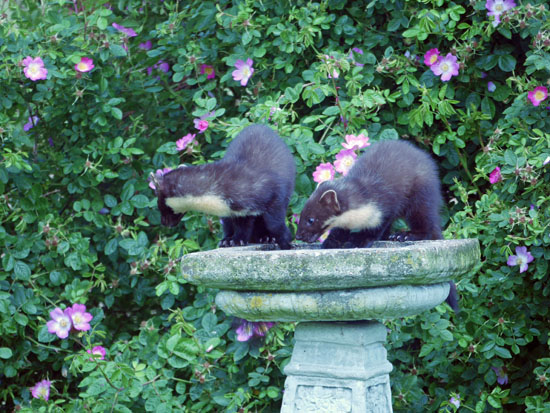 A later start today as I headed up to Strathconon a valley with silver birch forest bordered by mountains. On arrival we heard the distinctive call and song of Wood Warblers and Eurasian Jay the latter being a recent colonist. A Tree Pipit was located sitting and singing on top of a pine. Other species present included Blackcap, Willow Warbler, Grey and Pied Wagtails and calling Common Cuckoos. Next on the agenda was the lochans at Strathpeffer where an area of scrubby fields head a Whinchat (very scarce in recent years). On the lochan itself, Slavonian and Little Grebes, Tufted Duck, Mallard and Mute Swan. Overhead a pair of Red Kites, Barn Swallow, House and Sand Martins sallying for insects. I decided to head towards Loch Fleet and Embo to time our visit with high tides. At Loch Fleet the Ospreys were showing well in old pines. On the muddy edges Greenshank, Common Sandpiper and Northern Lapwing. Passerines were few but did include Eurasian Bullfinch, Eurasian Skylark and Eurasian Linnet. A stop by Loch Fleet had Common Eiders and Eurasian Wigeon so I pressed on towards Embo. Passed through the caravan park and looked out sea recording a flock of Long-tailed Ducks, Sandwich Terns and Northern Gannets. The exposed rocks held Ruddy Turnstones. At Nigg Bay substantial numbers of Pink-footed Geese were feeding on the salt-marsh with Whooper Swans and displaying Common Snipe. We ended the day walking around the Novar Estate which was excellent for sightings of crossbills. The cone bearing trees allowed close views of Common and Scottish Crossbills which gave a good comparison in size and the different calls given. A bonus was a male Parrot Crossbill sitting along on top of a pine which allowed long views. Also present were Eurasian Treecreeper, Eurasian Siskin, Goldcrest and Coal Tit.
Mammals: Brown Hare (1), Common Rabbit (C)

An early start today in order to meet up with Simon at Corrimony. We duly went up towards the two leks for Black Grouse and obtained close views of these amazing birds. The loch held a pair of Red-throated Divers and a hunting Common Kestrel nearby. On the return a stop for Common Redstart which gave great views along with Grey Wagtail and Red Kite. We went into Inverness for breakfast followed by a journey down the A9 to Cairngorm mountain. Although the funicular is closed until further notice the snow levels were much lower this year. This enabled us to observe Snow Buntings in the car park and a male Ring Ouzel singing from a nearby fence line. On the way down a brief stop at Loch Morlich added Common Goldeneye and a female Goosander. Feshiebridge was next on the list with a walk through the conifer forest where we had views of Crested Tits which can be hard to locate during May. A diversion to Craigellachie in Aviemore added Wood Warbler before I headed towards the Findhorn Valley. The wind was playing a major part today with Common Sandpiper and White-throated Dipper on the river and Red-legged Partridges on the grass verges. Ended the day by crossing the Farr Road with close views of Red Grouse.
Mammals: Roe Deer (3), Red Deer (C), Reindeer (C), Brown Hare (4), Common Rabbit (C), Red Squirrel (2), Feral Goat (C),

Our final day in the Highlands with a visit to Easter Ross and its varied habitats. Portmahomack was first on the list where the sheltered bay held substantial numbers of Common Scoter and Long-tailed Ducks. Tarbatness can be an interesting place for birds and today had the commoner species on feeders and in the gorse scrub. A short seawatch at the end added a group of Velvet Scoters among the seabirds which were dominated by Northern Gannet and Black-legged Kittiwakes. On our return journey another diversion to watch a pair of Ospreys at close range. Loch Eye was attractive to Mute Swans and the common dabbling ducks so I headed to Lochussie which is just beyond Dingwall. En route the tern rafts in the Cromarty Firth had Common and Arctic Terns present. At Lochussie we walked down towards the loch with Blackcap and Common Chiffchaff in the birch trees. On the loch Little Grebe and Tufted Duck. On having lunch a Northern Gowhawk appeared above the forest which was a bonus bird for the week. I ended the day and tour by visiting several sites on the Black Isle starting with Charonry Point. After a short wait the dolphins put in an appearance whilst a few terns were attracted to their splashing. In the Cromarty Firth a few Greater Scaup were lingering on with non-breeding Red-breasted Mergansers. Finally near the hide Pink-footed Geese, Northern Lapwing and Ringed Plover joined the Eurasian Curlew flock. By the old kirk a singing Common Whitethroat and a rather secretive Red-legged Partridge. Back to Cygnus House where the tour concluded.
Mammals: Brown Hare (3), Common Rabbit (2), Bottle-nosed Dolphin (5)