It was good to operate our first tour in Scotland since September 2020 due to the pandemic and restrictions put on us and others by the Scottish Government. Although later in May than usual a wide range of breeding birds and migrants were observed along with a good selection on mammals.

The gardens at Cygnus House always attract a wide range of birds coming to the feeders. Species present included Common Blackbird, Common Chaffinch, European Greenfinch, Eurasian Siskin, European Goldfinch, Great, Blue and Coal Tits, Great Spotted Woodpecker and along the entrance track Common Linnet, Yellowhammer and Reed Bunting. The silver birches had at least two Willow Warblers in full song after a late arrival from their wintering grounds. After breakfast I headed west towards Orrin an area of woodlands at the head of a long valley. On arrival we could hear several Wood Warblers in full song but they did not show at all. On the river a male Goosander, and a flighty Grey Wagtail, whilst the fields held many corvids, Common and European Herring Gulls and Mistle Thrushes. I decided to head towards Embo with a high tide at 11am. On arrival the conditions were poor with rain and strong winds. The grass held a single Ringed Plover whilst offshore we had excellent views of Northern Gannet, Northern Fulmar, Black-legged Kittiwake, Little Gull and Red-breasted Merganser. The grounds of the campground held Pied and White Wagtails, Eurasian Oystercatcher and Common Linnets feeding on dandelion heads. Loch Fleet and The Mound are not far away and on arrival we quickly located a pair of Osprey in dead trees. Around the waters edge Common Greenshank, Eurasian Curlew, Common Sandpiper and among the tree stumps Common Eider, Eurasian Teal, and Mallard. Further north at Brora the sea added a pair of Great Skuas, Razorbill and on the beach Dunlin and Sanderling. I joined the back road to Rogart from Brora which passes through a mix of habitats including lochs, marshes, woodland and moors. In the first section Greylag Geese, Northern Lapwing and a surprise find in Whinchat. The fences and trees attracted Meadow and Tree Pipits, Common Cuckoo, Spotted Flycatcher and Reed Buntings. A stop at a marsh added a displaying and singing Common Snipe, Eurasian Wigeon, Willow and Sedge Warblers. The moors at Rogart were particularly good for birds with sightings of Whooper Swan, Merlin and Northern Raven. A return to Embo added nothing of note and back to Udale Bay completing the day. 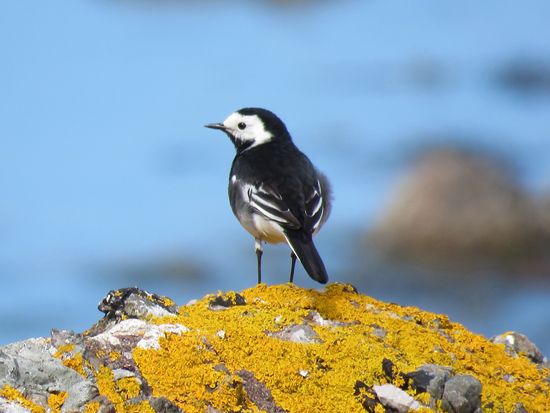 The fields next to Gordons Mill held a late party of Pink-footed Geese which is the latest date for several years and no doubt a result of poor spring weather. Back to Orrin where the Wood Warblers showed in the birch woodland. Before reaching Orrin the field edges and forest added Eurasian Jay, Lesser Redpoll and Yellowhammer. Achanalt was next on the agenda a wild and remote region of Wester Ross dotted with mountains, lochs and moorland. The main loch had the common ducks plus Tufted Duck, Common Sandpiper, Northern Wheatear and hundreds of Sand Martins and Barn Swallows. Further along the road at Achnasheen a Black-throated Diver was fishing on a roadside loch giving us excellent views. Gairloch was next and the sea loch of the same name. Careful scanning revealed Red-throated and Great Northern Divers, Northern Gannet, Great Skua, Arctic Tern and the first House Martins of the tour. The road next to Loch Ewe was unusually quiet although we located Twite in a paddock and a pair of Common Terns in the loch itself. We ended the day at Laide and Gruinard Bay with the latter providing us flying (close) views of an adult White-tailed Eagle being pursued by Hooded Crows.

An early start this morning to meet up with Simon the warden at Corrimony. Outside Cygnus House a Tawny Owl was calling from the forest. On arrival at Corrimony a drive onto the reserve quickly located two leks of Black Grouse which gave excellent views (late May is usually the latest as they stop lekking in June-August). Also present were Northern Lapwing, Eurasian Curlew, Common Cuckoo, European Stonechat, Willow Warbler and a reeling Grasshopper Warbler. A pair of Red-legged Partridges was unusual for this area. Back to Inverness for breakfast and then down the A9 to Cairngorm. It was an absolute mess with building work and low cloud. A male Ring Ouzel was singing from the ski lift giving good views. Loch Morlich which is lower in altitude attracted Common Goldeneye, Goosander and a steady passage of Common Swifts. Feshiebridge has a section of native woodland with well-made tracks running through the area. A slow walk added a Spotted Flycatcher and at least two female Common Crossbills. In a quieter area we were fortunate to locate a pair of Western Capercaillie feeding on the forest floor. Back to the van for lunch and then to the Findhorn Valley. An open area being grazed by sheep attracted Northern Lapwing, Eurasian Curlew and summer plumaged European Golden Plovers. On the river Common Tern, Common Sandpiper, Grey Wagtail and fleeting view of White-throated Dippers. I ended the day travelling across the Farr Road which was almost devoid of bird life apart from a single Red Kite.

A drive towards the remote village of Applecross in Wester Ross with access to a high mountain pass. On arrival a walk towards the radio mast scanning for Rock Ptarmigan although it was only heard on this visit. A visit to Sheildaig another village was productive for Red-throated Diver, European Shag, Song Thrush and Lesser Redpoll. Our journey took us past Achanalt with little difference to bird life of previous visits. Strathpeffer has two small lochans which hold a few pairs of Slavonian Grebes each year. On arrival they duly obliged close to the benches fishing for small fish. Other species on the lochans included Little Grebe, Common Coot, Common Moorhen, Barn Swallow and Sand Martin. In the reeds and adjacent scrub Willow and Sedge Warblers, Common Chiffchaff, Blackcap, European Robin and a hunting Red Kite. Our last stop was the Novar Estate with a walk around the forest. It was quiet for birds with sightings of the commoner species, Spotted Flycatcher and Eurasian Bullfinch.

A stop at Munlochy Bay for a reported Great Egret, no sign so I pressed on to Nairn east beach. Among the gulls at least three Lesser Black-backed Gulls a declining summer visitor to the Highlands. On the nearby River Nairn we located several Goosanders, Grey Wagtail, Mallard and Common Sandpiper. Findhorn Bay was affected by heat haze on both sides so I moved on to Burghead. En route a single Common Magpie, Common Whitethroat and Common Kestrel. By the cliffs a pair of European Rock Pipits showed on the shoreline. Offshore a steady passage of Northern Gannet, Northern Fulmar, Common Scoter, Common Guillemot, Razorbill and European Shag. A bonus came with a flock of Red Knot which dropped in to feed on the rocky shore, some of the birds were turning into their brick-red breeding dress. Lossiemouth had nothing of note apart from a very close fishing Osprey. The last stop in Moray was Loch Spynie which is now managed by the RSPB. On the loch a Great Crested Grebe a rare bird in these parts and Black-headed Gulls and Common Terns on a raft. Next stop today was Ness Islands in Inverness with a walk through the large trees where a pair of Eurasian Treecreepers fed on the trunks. The River Ness held White-throated Dipper and Grey Wagtail. I ended the day at the Cromarty Firth and Udale Bay adding a single Pink-footed Goose, Common Eider and Eurasian Wigeon to the day list.

Back to the west coast with a stop in Ullapool which was busy with tourists and visitors on the NC500. The tide was high on arrival with a late Ruddy Turnstone feeding on seaweed. A few gulls were around plus the Hebridean race of Dunnock. Kylesku is a small village which gives views into a sea loch which is littered with mussel ropes. Careful scanning produced Red-throated Divers, Common Eider, Arctic Tern, Razorbill and Common Guillemot. In the surrounding trees plenty of Willow Warblers and calling Common Cuckoos. A short stop at Scourie had Dunlin and Ringed Plover on the beach. Next on the agenda was Handa Island which is accessed by passenger ferry (now very expensive). On landing, a walk towards the Great Cliff passing many Great and Arctic Skuas which were either on eggs or territory. On reaching the cliffs we found thousands of auks including Northern Fulmar, Black-legged kittiwake and Atlantic Puffins. On the return Common Stonechat, Northern Wheatear and a female Red Grouse flushed from cover. Further north we entered Durness and to Balnakiel Bay where Great Northern Diver, Common Scoter, Long-tailed Duck and Whimbrel were located. Around the bay several groups of Rock Doves and Eurasian Rock Pipits were seen. Checked in at our accommodation, and back out again at 2000 hours to visit Balnakiel farm. The ancient water meadows are highly productive for birds and it often harbours rarities. Up to four Wood Sandpipers were feeding in seasonal ponds. The reeds held calling Water Rails and singing Sedge Warblers. In the marsh itself a good selection of birds included Mute and Whooper Swans, Gadwall, Northern Shoveler, Eurasian Teal, Tufted Duck, Whimbrel and Lesser Black-backed Gulls. 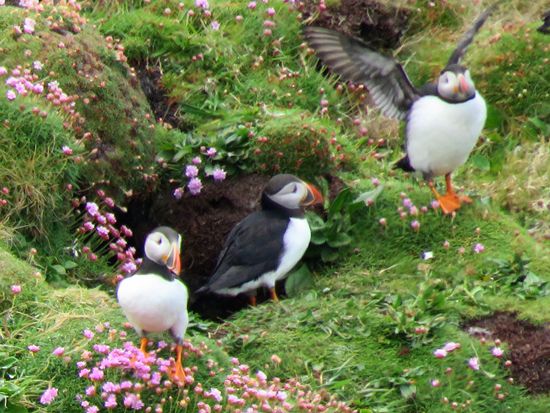 Checked out of the guest house and headed east towards Thurso and the Hope Valley. This is a remote and rarely visited part of the Highland region dominated by lochs and mountains. Loch Hope was good for Black-throated Diver, Common Greenshank and Common Snipe. In the grassland habitat a summering Whinchat. Our main target finally appeared being mobbed by Northern Ravens, the valley holds several pairs of Golden Eagles and is very reliable for them. Almost an hour was spent watching these magnificent birds hunting the mountain sides for hares and rabbits. Sandside Bay was next on the agenda which is adjacent to the defunct Dounreay Power Station. On the beach migrant Sanderling, Dunlin and Ringed Plovers plus the commoner gull species. Stops at Scrabster and Dunnet Bay produced little of note so the group advanced to St John’s Pool. Recent changes have meant restricted opening hours so I met up with Julian who kindly let us in for an hour. From the hide close views of Sandwich, Arctic and Common Terns, Black-headed and Common Gulls, Gadwall, Tufted Duck and Northern Shoveler. It was soon time to head south passing through the flow country of Forsinard. In this huge area it is hard to locate birds which was the case on the visit. 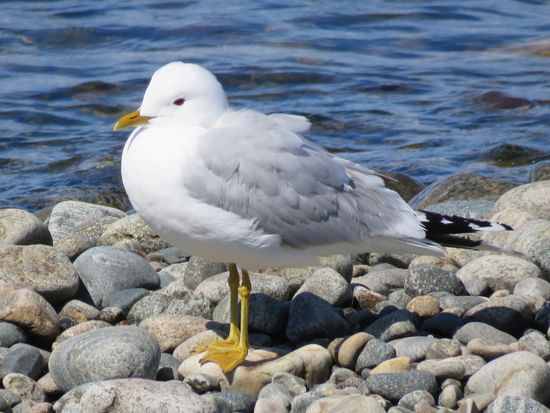