This was the second tour of our spring time agenda taking place during the second week of June. Although late in the migration season, weather in late May had pushed many species back to breed. One exception was the total absence by sight and hearing of any grouse species suggesting they were sitting tight on clutches. The following diary should help revisit the tour and the enjoyable experiences we had during the week.

The tour started in early afternoon with a visit to Udale Bay which is literally on our doorstep. The tide was starting to rise which attracted Canada Geese, Common Shelduck, Mallard, Mute Swan, Northern Lapwing, Eurasian Oystercatcher, Ringed Plover and a single Eurasian Curlew. Beyond Jemimaville a scan into the deeper waters of the Cromarty Firth added fishing Arctic Terns, Red-breasted Merganser and groups of Common Eiders lingering around the mussel beds. Due to the number of tourists around I decided to visit the Fairy Glen a long strip of woodland bordered by large trees and scrub. A walk through this habitat produced sightings of Blackcap, Spotted Flycatcher, Willow Warbler and Eurasian Siskin. On the river itself a pair of Grey Wagtails searched for insects. Back to Cygnus House and a look at the feeders attracting Great, Blue and Coal Tits, various finches, House and Tree Sparrows and table-attending Yellowhammers. 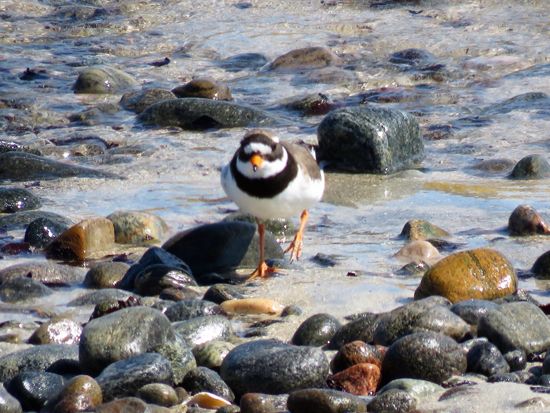 First birding stop today was the birch woods near Orrin. I was a little concerned that the Wood Warblers may have stopped singing but to my surprise at least eight birds were on territory and showed well displaying on exposed branches. Also present were Blackcap, Garden and Willow Warblers, Tree Pipit and calling Common Cuckoos. On the way out Mistle and Song Thrushes were noted by the roadside. Achanalt was next on the agenda a large area of wetland which is important for ducks and waders. On the islands and water edge Dunlin, Ringed Plover, Common Redshank, Common Greenshank, Common and Wood Sandpipers and a singing Common Snipe. The open water was attractive to Eurasian Wigeon, Tufted Duck, Mallard and significant numbers of Sand Martins and Barn Swallows. I then drove to Gairloch on the west coast and scanned the waters of Loch Gairloch. Careful scanning revealed Great Northern and Red-throated Divers, European Shag and a variety of gulls. The road out to Melvaig added Common Stonechat, Northern Wheatear and a very vocal Song Thrush singing from a ruined building. Loch Ewe and Mellon Charles were quiet apart from great views of a Common Otter eating a Monkfish, Little Grebe and several pairs of Greylag Geese with goslings. At Laide we located a late Whimbrel, Great Skua and a party of Rock Doves. Our last stop was at Gruinard Bay with distant views of Northern Gannets. 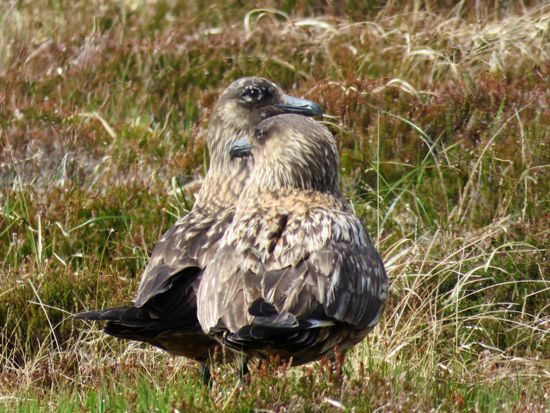 Our first birding stop today was at Embo which offers a good chance of seabirds and sea ducks. On arrival a check of the beach revealed Bar-tailed Godwits and summer plumaged Sanderlings. Offshore a distant Little Gull in breeding plumage, Common Guillemot, Razorbill and Red-breasted Mergansers. A few sea ducks were seen including Common Eider and Common Scoter. As I drove towards Loch Fleet a surprise find was a Eurasian Magpie in a roadside garden. In the firth itself, small numbers of Lesser Black-backed Gulls, Black-legged Kittiwake, Eurasian Curlew and Northern Lapwings. The Mound always attracts birds with this visit having a pair of Ospreys nesting in dead trees. On the loch edge we found feeding Common Sandpipers, Mallard and Eurasian Teal. The scrubby trees held Willow Warbler, Eurasian Bullfinch, Blackcap, Yellowhammer and Lesser Redpolls. Further up the A9 a diversion to Brora seafront where offshore rocks had Red Knot, Ruddy Turnstone and a Sandwich Tern. It was time to head inland towards the settlement of Rogart which is reached by back roads running through moorland and by Loch Brora. The cliffs had nesting Northern Fulmars. In the scrub and bushes we found Whinchat, Common Stonechat, Reed Bunting, Eurasian Siskin and the commoner finches. The open moors attracted Eurasian Kestrel and Northern Ravens. A short diversion was made for Whooper Swans which had up to five newly born cygnets. Our last stop was the Novar Estate via Lochbuie which gave us close views of an adult Golden Eagle. On arriving at Novar we embarked on a walk through the woodland. Bird song was almost non-existent from a few days ago although we added Goldcrest and a pair of Common Swifts over the forest canopy.

A change of scenery today as I headed to Cairngorm National Park. I parked up and immediately found a Ring Ouzel collecting worms in the grass. Very close views of this stunning male down to a few feet. The alpine garden had Willow Warbler and a Dunnock. The weather had started to close in so we went down to Loch Morlich where the weather was clearer. Not too much here apart from a female Goosander and Barn Swallow and Sand Martin catching insects over the loch. Next was the forest habitat around Feshiebridge where we were stunned to see four Ospreys circling around a large tree. A walk on forest tracks was very quiet apart from singing Tree Pipits and a few Coal Tits. I decided to cut our losses and visit Aviemore and a section of deciduous woodland. Bird song was almost non-existent here as well apart from a family of Long-tailed Tits. The Findhorn Valley was next with the lower sections holding Northern Lapwing and Eurasian Curlew plus a distant view of Golden Eagle. I drove to the end of the valley with the only bird of note being a male Northern Wheatear. At the end of the day we crossed the Farr Road with limited success.

Today the group travelled to Ullapool on the west coast where on arrival poor weather had arrived. In the bay a few auks and a Red-throated Diver. Further up the road a stop adjacent to cliffs and river had a singing Common Snipe and Sedge Warbler. Kylesku is another remote village which offers views into a section of the Atlantic Ocean. The rocks had Arctic Terns and Common Terns whilst the open waters attracted Red-breasted Mergansers. I then went to Scourie where Dunlin and Ringed Plover were on the beach. Handa was our main interest today an offshore island with large seabird and Skua colonies. The trip across to Handa added our first Black Guillemots of the trip. On arrival a pair of Great Northern Divers was fishing in the bay. An introduction by the wardens was followed by a walk towards the cliffs. The first part of the walk was productive for Northern Wheatear, Meadow Pipit, Eurasian Skylark, Dunnock and Lesser Redpoll. On entering the boardwalk Great Skuas and Arctic Skuas with the latter attacking us to protect their territories. On arriving at the cliffs close views of Common Guillemot, Razorbill, Atlantic Puffin, Black-legged Kittiwake, Northern Fulmar and a few Northern Ravens. Back to the mainland and the journey up to Durness the most north-westerly village in Britain. A visit to Balnakiel Bay added Great Northern and Red-throated Divers, Sandwich and Arctic Terns. Checked in at the guesthouse, and after dinner a visit to the wetland of Balnakiel Farm. In the reeds we heard calling Water Rail and Sedge Warblers. The marshy areas held Whooper and Mute Swans, Gadwall, Northern Shoveler, Tufted Duck and Mallard. A surprise find was a flock of Snow Geese (both colour morphs) and of unknown origin. 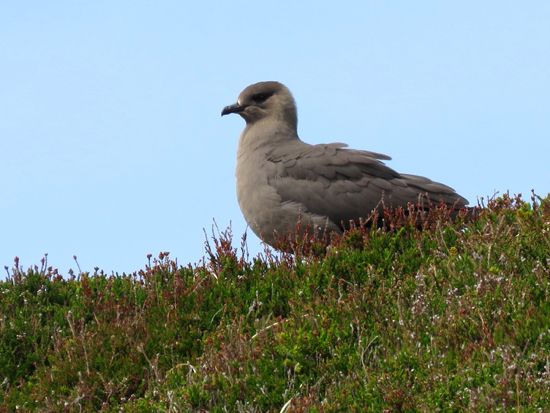 I started the morning with a short diversion to Kyle of Durness where the flower meadows held our target bird, Twite. A few wading birds were also noted including Common Greenshank, Dunlin and Ringed Plover. The road follows Loch Eriboll and eventually a turning inland down the Hope Valley. The flooded marshes and extensive loch held a pair of Black-throated Divers and Common Sandpipers. No sign of Golden Eagles today so I pressed on towards Sandside Bay which is adjacent to the old nuclear power station. In the bay we located Great Northern Divers, Razorbill, Common Guillemot and a steady passage of Northern Fulmars and Black-legged Kittiwakes. On the shore we were delighted to observe Common Shelduck and Common Eider with newly hatched young. In the strands of seaweed a pair of European Rock Pipits a scarce summer breeder around the coasts. Lunch was taken at Dunnet Bay which was oddly very quiet for birds apart from three species of divers. I had arranged a visit to St John’s Pool where I met up with Julian who let us in to observe the breeding birds. This is a great place to watch Sandwich, Common and Arctic Terns at close range, Black-headed and Common Gulls and a nice range of nesting ducks. In the garden a pair of Spotted Flycatchers was attending a nest-box. Time was ticking as I headed west and then south to the huge expanse of Forsinard. The area is hard to access but new trails and signs have made things a little easier. Off the main road a maintained track leads towards houses and a newly built hide. To our delight huge numbers of House Martins, Northern Wheatears, Eurasian Skylark, Northern Lapwing and Meadow Pipits. The icing on the cake was a male Hen Harrier quartering the ground for prey which stayed in view for a good ten minutes – great stuff. On exiting a sheep field was checked with a single European Golden Plover in view the only sighting of the tour. Back to the Black Isle.

Back to Wester Ross this morning to visit a high mountain pass for Rock Ptarmigan. On arrival we were thwarted by low cloud and had to retreat to lower levels. Earlier a visit to Kishorn was productive for gulls including Lesser Black-backed a European Rock Pipits. I decided to cut our losses and travel to Sheildaig a popular tourist village with a wooded offshore island. A little bit of searching produced an adult White-tailed Eagle sitting in a dead tree, other species present included Black Guillemot, European Shag and in gardens Song Thrush, Lesser Redpoll and the common finch species. Strathpeffer was next on the route where we quickly located Horned Grebes on the upper lochan. The scrub was alive with song from Sedge and Willow Warblers, Blackcap, Yellowhammer and Reed Bunting. In the more open areas of water Little Grebe, Common Coot and Tufted Duck. I had time to visit the Ness Islands where a White-throated Dipper was located feeding young and Grey Wagtails along the river itself. The remainder of the day was spent in the Findhorn Valley and along the Farr Road with similar results from a few days ago. All in all an excellent week in the Highlands especially being the second week of June.