This was the second autumn tour of 2019 which differed slightly with two bases on the Black Isle and the fishing port of Peterhead. The group observed a wide range of species from the spectacular leks of Black Grouse at Corrimony, thousands of migratory geese on the Black Isle and several eagles on the coast of Wester Ross. In Aberdeenshire we located a wintering Great Egret and winter waders along the rocky coast notably Purple Sandpipers which are in serious decline. The weather at the latter end of the week was not helpful with rain and unfavourable winds.

I started with a quick trip down to Nairn to check things out on the sea and beach. It was rather quiet so I returned to the airport to pick up Ryn and head back across the Kessock Bridge onto the Black Isle. High tide was around 1400 hours and our arrival coincided with large numbers of birds being pushed towards the shore. Pink-footed and Greylag Geese were particularly numerous with Eurasian Wigeon and Eurasian Teal whilst the salt-marsh attracted several species of gulls and waders. Careful scanning revealed a Little Egret which is still a rarity here, Black and Bar-tailed Godwits, Common Greenshank, Northern Lapwing, Red Knot and hordes of Common Redshanks. In the deep water channels a few Red-breasted Mergansers and the first migrant Common Goldeneyes. A short journey down the road to Jemimaville and a scan into the Cromarty Firth added Slavonian Grebes, Common Eider, Greater Scaup, and overhead Meadow Pipits and Eurasian Skylarks. A diversion to Cromarty and then Chanonry Point added the commoner species so I headed to home. 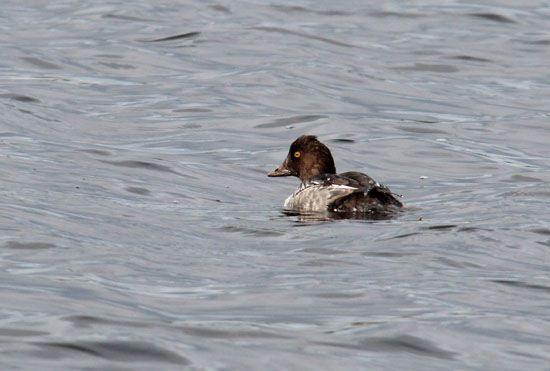 An early start was essential to meet up with Simon at Corrimony. The drive took just under an hour and we entered the reserve with a surprise find of two Eurasian Woodcock sitting on the road – great and extended views. The two leks produced stunning views of 39 Black Grouse at close range, often down to a couple of metres. Also present were a migrant party of Mistle Thrushes with a few Redwings mixed in as well. Breakfast was taken in Inverness followed by a visit to Cairngorm where things appear to have stalled in fixing the railway. Not too much around apart from a distant Red Grouse and overhead parties of Pink-footed Geese moving south. Feshiebridge is a small village not faraway and has good natural forest around its borders. One small patch produced close views of Crested, Coal and Great Tits, Eurasian Treecreeper, Eurasian Jay and a male Great Spotted Woodpecker. In the afternoon a visit into the Findhorn Valley where the wind was blowing a bit which affected birds of prey apart from a single Red Kite drifting along the valley. The only Red-legged Partridge was also noted flying across the road. Our final leg was the Farr Road which on this visit had a few parties of Red Grouse a fitting end to the day. 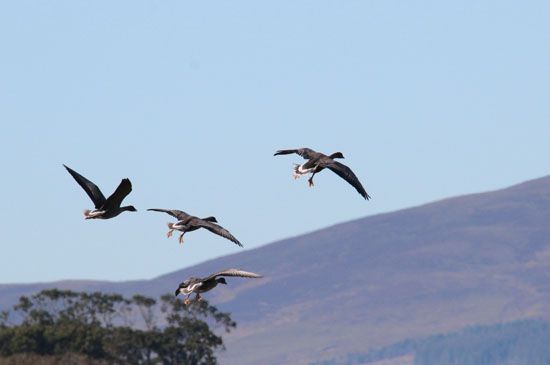 Today was spent in the wilds of Wester Ross a stunning area of mountains and lochs. En route to Achanalt a migrant Eurasian Jay flew past us. Once at the loch a raised viewing point revealed a juvenile White-tailed Eagle sitting on a ruined cottage with two Hood Crows for company. On the loch itself up to 16 Whooper Swans, Greylag Geese, Tufted Duck, Mallard and Eurasian Teal. On a distant peak an adult Golden Eagle was also located basking in the sunshine. A willow in front of us attracted three juvenile Eurasian Bullfinches and calling Eurasian Siskins. Next was the village of Kinlochewe and its gardens and pine trees. Luck was with us as the two distinct races of Dunnock were present and two Red Crossbills flew overhead giving their distinctive flight calls. Our journey took us past Loch Maree and onto the coastal village of Gairloch. A scan of the sea-loch added Red-throated Diver, Red-breasted Merganser, Pale-bellied Brent Goose and two male Common Scoters. The drive down towards Melvich did not add too much so I proceeded towards Loch Ewe. The first stop quickly produced Black-throated Diver, Slavonian Grebe, Black Guillemot and Rock Pipit. Further stops along the loch revealed the presence of hundreds of Northern Gannets and Black-legged Kittiwakes. Passerines were few but included a roving flock of Eurasian Linnets, Common Stonechat, Redwing and European Goldfinches. We ended the day at Laide and Gruinard Bay with the latter location having a Great Northern Diver.

A later start today with a visit to the Novar Estate in Easter Ross. From the car park the group set off on a walk into the forest with its mix of old natural pines, spruce and larch the latter two being harvested commercially. It was not long before a group of Scottish Crossbills were located feeding on large pine cones and in some instances they actually 'snipped' the cone off the tree. Nearby a Red Crossbill turned up to give a good comparison. Before leaving Novar we added Lesser Redpoll, Eurasian Siskin, Mistle Thrush, Coal Tit and Goldcrest. Portmahomack was our next destination which was protected from the worst of the wind. In the bay were Red-throated Diver, Common Scoter, Common Eider, various gulls, Great Cormorant and European Shag. The road to Tarbatness goes through fields which held a sizeable flock of Eurasian Linnets. At the point a walk towards the plantation and a seawatch. At the point a passage of Northern Gannets plus two fly-by Dunlin. The common birds were around in the gorse bushes, although Ryn observed a Merlin within the car park. Lunch was taken at the waterfront of Tain where several species of ducks were present including Northern Pintails and Whooper Swans further out in the firth. Up to Embo to coincide with high tide at the caravan park. Offshore we viewed groups of Common Eider, Goosander, Red-breasted Merganser, Razorbill and four late Arctic Terns. Loch Fleet and The Mound had similar birds from earlier in the day with the addition of Little Grebe and a hunting Eurasian Sparrowhawk. At 1600 hours a return to the Black Isle where I checked Udale Bay and the Cromarty Firth both of which had similar birds from earlier in the week. 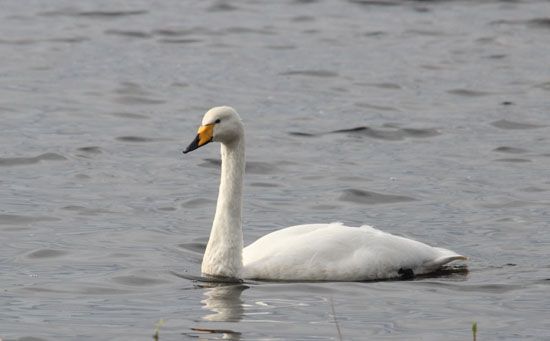 This morning we headed east towards Aberdeenshire via Moray. Our first stop being the River Nairn in Nairn itself. This paid off as a surprise find was a Common Kingfisher and up to three White-throated Dippers. Cullen if famous for its soup but our stop was to locate anything unusual on the beach. Careful searching produced a male Grey Wagtail and a few Purple Sandpipers on the rocks. Offshore a steady stream of Northern Gannets and Black-legged Kittiwakes which was to continue for the rest of the trip. Brief visits to Portsoy and Banff produced the same birds so I headed to Loch of Strathbeg which is one of the RSPB flagship reserves within Scotland. A walk to the Tower Hide was productive for Northern Lapwing, European Golden Plover, Black-tailed Godwit and scarcer ducks notably Gadwall, Northern Shoveler and Northern Pintail. A female Western Marsh Harrier flew over scattering everything in sight. The weedy fields held Yellowhammer and Reed Bunting. Ended the day with a visit to another part of the reserve recording Greater Scaup, Tufted Duck and the declining Common Pochard. Within the reeds we could hear the 'squealing pig' calls of Water Rail.

The first area today was the coastal village of Collieston with its churchyard and surrounding scrub and bushes. On arrival all we could find was the common resident birds and no expected migrants in favourable conditions. On leaving the village a small lochan had two Eurasian Coots, Eurasian Wigeon and Little Grebe. The Ythan Estuary was next on the agenda an area which can be highly productive for birds. A visit to the hide was timed for high tide which concentrated the waders which included two juvenile Ruff, Red Knot, Bar-tailed and Black-tailed Godwits, Dunlin, Grey Plover and a vagrant Great Egret. The area around the hide had Tree Sparrows. In the lower parts of the estuary we caught up with Goosander, Red-breasted Merganser, Common Eider, up to 1,500 Golden Plovers and a pair of Little Egrets. It was time to move south towards Aberdeen and the River Don where we located Red-throated Diver, Long-tailed Duck and the first Eurasian Magpies of the tour. Girdle Ness is on the other side of Aberdeen and on this visit was notable for passing Northern Gannets, Common Guillemots and Black-legged Kittiwakes. I decided to head south and visit St Cyrus which is north of Montrose. The willow bushes held Goldcrest and Long-tailed Tits. Afterwards a walk towards the river estuary added Common Greenshank and Common Buzzard to the day list. We ended the day at Meikle Loch a known roosting spot for geese. Apart from the two common species we added Tufted Duck, Common Pochard and in the surrounding fields Reed and Corn Buntings.

Our last full day started with a trip to Peterhead Harbour which was unusually quiet for a weekend. Not too many gulls present apart from Great Black-backed and Herring. Afterwards a quick stop to pick up supplies and then to Rattray Head, a noted migration spot adjacent to the North Sea. The entrance track is rough in places. A stop en route allowed us views of a loch bordered by recently harvested fields. The fields held substantial numbers of Eurasian Curlews, Eurasian Wigeon and a roving flock of Eurasian Linnets. On the loch the common ducks of NE Scotland and a scattering of Mute and Whooper Swans. At Rattray Head we disturbed a group of recently arrived Redwings. A walk to the beach and a scan offshore produced nothing new so I headed north again to the fishing port of Fraserburgh. The town is rather depressed in places and most of the fishing fleet appeared to be tied up. By the lighthouse a visible passage of Northern Gannets, auk species, Red-throated Diver and Dunlin. The rocky foreshore held a pair of Rock Pipits. A diversion to St Combs and then towards Loch of Strathbeg for the afternoon. The feeders by the car park had a Great Spotted Woodpecker. A walk towards the two wetland hides had similar birds to two days ago with lesser numbers present. I decided to visit another hide by the old airfield for the rest of the day. Plenty of time spent here with sightings of Barnacle Geese and Common Snipe which were new for the tour. On the loch good numbers of Whooper and Mute Swans, Little Grebe and ducks. Late afternoon we went back to Peterhead for our final night.

Basically this was a drop off and return day back to Inverness. The weather was dreadful with pouring rain and strong winds which would have made birding almost impossible. All in all a very enjoying weeks birding in Scotland.