This was our first visit back to the Canary Islands after a break of several years. Although December is not the best month for seabirds many of the land birds start to breed. Our tour started in Fuerteventura where we located rare vagrants in the form of Allen's Gallinule and Lesser Scaup. In addition to these we had outstanding views of displaying Houbara Bustards and Cream-coloured Coursers and many endemic Canary Islands Stonechats. The tour concluded on the largest island of Tenerife where the group located the remainder of the endemics mainly in the north of the island.

My thanks go out to my old friend Eduardo Garcia del Rey for up-to-date information on the ever-changing location of the island endemic birds. Our next tour to the Canary Islands is planned for 2020. 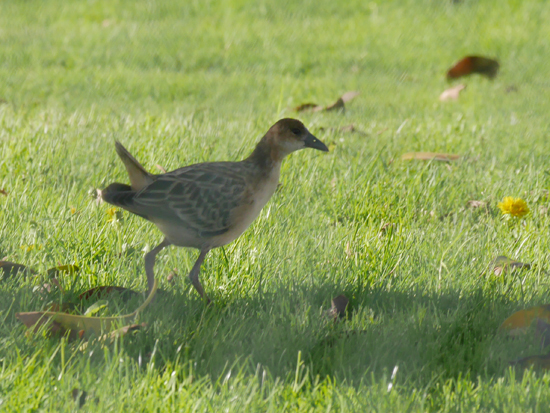 On the 22nd we left London Gatwick on time for the flight down to Fuerteventura in the Canary Islands. Arrived on time and picked up luggage and transport before transferring north to our base. On the 23rd I arranged to have our guide Elios to meet us at Caleta Fustas at 0900 hours. Our main interest was the golf links which attract many birds to the artificial pools and fairways. The first birds we located were Ruddy Shelducks which proved to be common in the area. In gardens sightings of African Collared Dove and Eurasian Hoopoe. The first golf club produced views of a juvenile Eurasian Spoonbill, Black-winged Stilt, Common Sandpiper and Common Greenshank. The bonus here was a juvenile Allen's Gallinule a vagrant species which breeds in sub-Saharan Africa. We had to wait a little while before it showed feeding on the grass at close range. Another area of the club was visited with a group of Plain Swifts calling and feeding above the tamarisk trees. Most move out in winter so this was indeed a bonus for the group.

The next golf club is further south and allows better views into the pools. This was again productive with a female Lesser Scaup, Common Coot, Eurasian Teal and a few White Wagtails. A large gull flock held mostly Yellow-legged and at least two Lesser Black-backed Gulls of the race graseli. Picked up supplies and headed inland to Rosa del Toro, a seasonal lagoon with reeds and adjacent agricultural land, the latter a scarce habitat on the island. From the car park we located the endemic Canary Islands Stonechat, Spectacled Warbler, Berthelot's Pipit, Lesser Short-toed Lark and Spanish Sparrows. In the drying reedbed a pair of Common Moorhens. 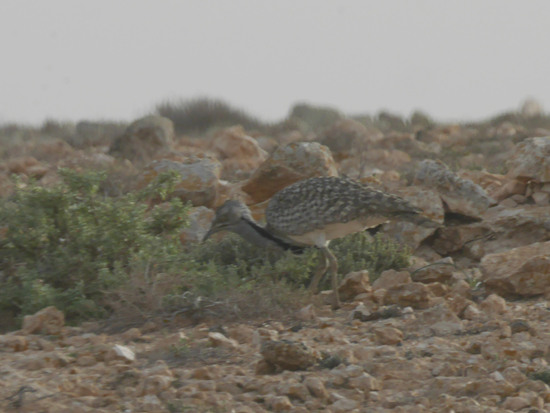 Next on the agenda was the Barranco at Rio Cabras. On arrival the local dump attracted up to thirty Egyptian Vultures, Common Buzzard, Common Raven and hundreds of Yellow-legged Gulls. On the walk towards the Barranco a Great Grey Shrike entertained us by catching a large insect and butchering it on a thorn. From a viewpoint looking down into the river several species were noted including Little Egret, Green and Common Sandpipers, Little Ringed Plover, Grey Heron and fly-by Trumpeter Finches. Our last area was Tindaya a habitat of stony plains dotted with bushes and stands of rocks. A slow drive through this area paid off with excellent sightings of Houbara Bustard and Cream-coloured Coursers a fitting end to the day.

The day dawned with exceptionally strong winds from the east which made birding challenging for the day ahead. I started by visiting La Oliva, a town which has strong ties with farming. A grassy field gave us good views of Trumpeter Finch, Lesser Short-toed Lark, Berthelot's Pipit and Eurasian Hoopoe. On the way to Los Molinos a Barbary Falcon flew past at high speed. On arrival at the reservoir the wind was so strong that it made birding almost impossible. On the water the group located Common Coot, Black-winged Stilt and two Common Greenshanks. On the return towards the main road a single Grey Heron, Rock Pigeons and a bonus find in an immature Eurasian Marsh Harrier.

Next on the agenda was the attractive hill village of Betancuria with its old buildings, gullies and trees, the latter being a rare habitat on the island. Eurasian Collared Dove, Great Grey Shrike and Spanish Sparrows were the main birds present. After lunch a short walk among scrub and palms added Sardinian Warbler and pair of Barbary Partridge walking along a ridge. The village of Vega had nothing of note so I headed back to Caleta Fustas on the coast. The old saltpans held Common Sandpiper and two Sandwich Terns fishing in the bay. Caleta Fustas had similar birds to yesterday with the addition of a single Eurasian Wigeon and a Whimbrel on the golf course.

Checked out of the hotel and travelled back to the village of Betancuria. The usual species were along the route including a pair of Barbary Partridges. On arrival in the village we quickly located two Fuerteventura Blue Tits singing and displaying from the top of a bare shrub. Nearby Sardinian Warblers were calling from dense cover. It was time to travel back towards the airport with stops en route for a covey of Barbary Partridges and four Black-bellied Sandgrouse. A short diversion to the golf course added nothing new. The flight to Gran Canaria was on time where we waited for our connection to Tenerife North airport. On exiting the airport at least three Grey Wagtails flew over a fitting end to the day.

Around the hotel the group recorded Eurasian Blackbird, Canary Islands Chiffchaff, Eurasian Kestrel and a hunting Eurasian Sparrowhawk. Our first stop was almost by accident as we ended up in the pine forests at Las Clucitas. A short walk here produced the local race of European Robin, Tenerife Blue Tit, Great Spotted Woodpecker and Atlantic Canary singing from the tops of dead pines. Los Rodeos was next, an area of farmland close to the north airport. The fields held Barbary Partridge, Berthelot's Pipit, Eurasian Linnet, Spanish Sparrow and a single Corn Bunting. Beyond the town of Tejina is a small roadside pool which attracted Common Coot, Common Moorhen, Grey Heron and Little Egret.

Picked up supplies in Tejina and had a picnic lunch at Punta del Hedalgo. The rocky shore towards the lighthouse was productive for Grey and Ringed Plover, Whimbrel and Ruddy Turnstone. Offshore a few Yellow-legged Gulls and an adult Lesser Black-backed Gull. The rest of the day was spent exploring Mirador de Jardina and the roads running through the laurel forest of the north east. Very few birds around apart from two flocks of Plain Swifts, Eurasian Buzzard and a single European Goldfinch. Headed back to base late afternoon after another good day in the Canary Islands. 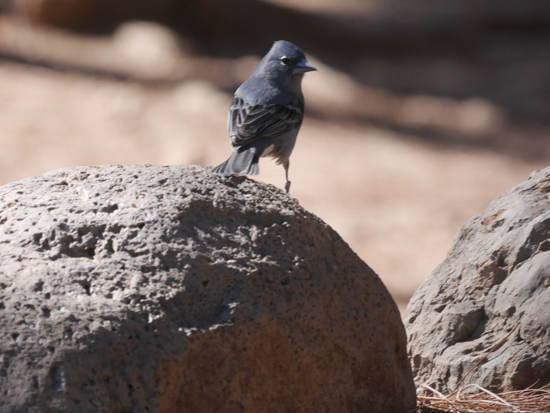 The usual birds were around the hotel this morning. Our first task was to visit an area of laurel forest high in the mountains along Road 342. After navigating through a maze of streets and villages we arrived at a viewpoint. Initially it was quiet until a party of Bolle's Pigeons were located sitting in a dead tree on a cliff edge. In the same area a few Laurel Pigeons were also noted with their white tails being obvious in flight. Also present in the same area were Eurasian Sparrowhawk, Eurasian Kestrel, European Robin and Grey Wagtail. Later in the morning we travelled across the amazing landscapes of Teide National Park to the campground at Las Lajas. In no time at all we were watching the endemic Tenerife Blue Chaffinch, Atlantic Canary and the local race of Great Spotted Woodpecker. Next on our list was Erjos and the newly created national park. En route single Great Grey Shrike and Common Raven. A walk at Erjos through the forest allowed us views of Bolle's Pigeon, Common Chaffinch, Goldcrest and Canary Islands Chiffchaff. Over the forest hundreds of feeding Plain Swifts. Near the parking area a Common Buzzard flew past causing panic among the local pigeons. Back to base after another enjoyable day in Tenerife. 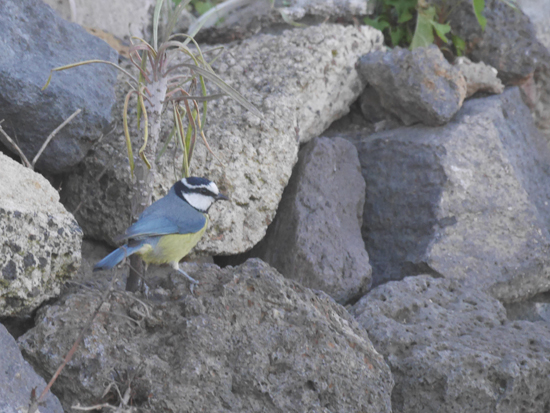 Today I set off towards the north-west coast of Tenerife with the first stop at Garachico. A quick look at the island offshore only produced a few Yellow-legged Gulls. Teno Bajo was next on the agenda a long peninsula dominated by steep cliffs and a rocky coastline. On the cliffs groups of Atlantic Canary and Tenerife Blue Tit, at the point itself views over to La Gomera and literally no birds at all. Picked up supplies and went to Teno Alto a fascinating area of old farms and abandoned fields. Interesting species here included the last stronghold of Common Ravens on the island, a few Eurasian Linnets and best of all a flock of Rock Petronias perched on telegraph wires. The rest of the day was spent in the laurel forests where similar birds to yesterday afternoon were recorded.

Checked out of the hotel and headed north towards the airport and onto the town of La Laguna. An enclosed park added Eurasian Blackcap, European Serin, Eurasian Blackbird to the day list. At another park a walk around the area was productive for a Black-crowned Night Heron and Eurasian Moorhen. It was time to head south and the main tourist areas which have badly affected the remaining birding sites of southern Tenerife. In the town of Las Galletas we quickly located Rose-ringed and Monk Parakeets busy with nest building. A short distance away a visit to the Los Christianos area for the scarce Nanday Parakeet which was located in a bare tree within a shopping street - three birds in total. I tried various golf clubs along the coast and several pools but the area appears to be suffering from a water shortage and disturbance. Back to the south airport for the flight back to the UK after an enjoyable week in the Canary Islands.