Autumn in the Highlands 2014

Our annual September birding week proved to be very successful mainly due to favourable winds from an easterly direction combined with blue skies and perfect conditions for birding. During the week we observed several interesting birds including a juvenile Pectoral Sandpiper near Nairn, Red-necked Grebe, Pale-bellied Brent Goose, White-tailed and Golden Eagles, above average numbers of Hen Harriers, large flocks of Black Guillemots off the west coast, Rock Ptarmigans on territory at Cairngorm, juvenile Little Gull and passage migrants notably Black-tailed Godwit of the Icelandic race, Merlin, returning Slavonian Grebes and Greater Scaup, lekking Black Grouse and a good selection of Scottish specialities. 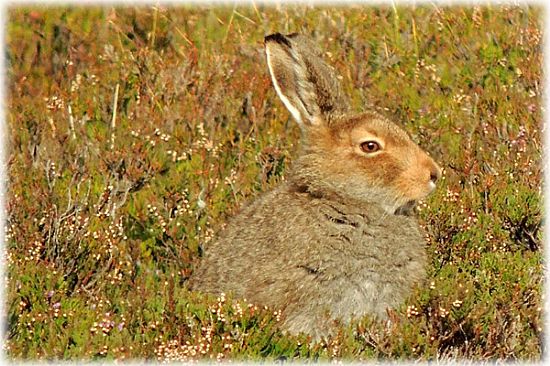 The first day is usually disjointed due to the various pick-up times, and today was no exception. The first stop was at the seaside town of Nairn which offers good views of the Moray Firth and its abundant wildlife. Nairn west beach had a few lingering Sandwich Terns and Common Eiders loafing around the central waters. On the east beach a plethora of gulls including Black-legged Kittiwake and a Lesser Black-backed Gull the latter being mainly a summer visitor here. In among the rocks we located Ruddy Turnstones and Eurasian Oystercatchers. I had to be at the airport for 1400 hours with a short diversion to see a juvenile Pectoral Sandpiper, primarily a scarce autumn migrant and always a popular bird. Also present on the pig pool were Ringed Plover and Dunlin. At Ardersier a summering Whooper Swan was noted along with Red-breasted Mergansers and the first returning Eurasian Wigeon of the autumn. We headed back onto the Black Isle where another client had arrived by car. The tide was high as we pulled up by the hide at Udale Bay. Much to our delight a pair of Ospreys were fishing the bay. Waders congregated in flocks including Red Knot, Bar-tailed Godwit and Eurasian Curlews. A short stop at Jemimaville produced little of note until a summer plumaged Red-necked Grebe appeared from nowhere, a stunning end to the first day. 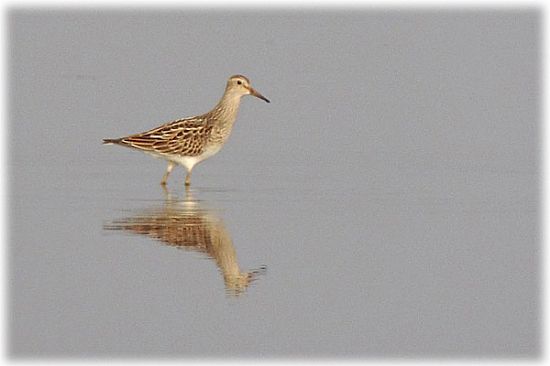 From the Black Isle a return visit for the Pectoral Sandpiper which duly showed on what was to be its last day. In nearby fields a covey of Grey Partridge whilst Dunnock and Yellowhammer used the gorse bushes. A male Eurasian Sparrowhawk sat quietly in a dead tree looking out for suitable prey. A return to Nairn had similar birds to yesterday plus Northern Gannet, Razorbill, Rock Pipit and one less Pale-bellied Brent Goose. On the river a pair of Grey Wagtails fed among the stones. Onwards to Roseisle and a visit to the beach which offers an elevated view over the bay. Careful scanning revealed Common and Velvet Scoters, Greater Scaup, Common Guillemot, Common Eider and rafts of European Shags. Burghead and Hopeman offered similar birds and the bonus of three Bottle-nosed Dolphins close to shore. On entering Lossiemouth we found a pair of Eurasian Magpies a very scarce bird in these northern parts. Lossiemouth was full of tourists enjoying the late summer sunshine. On the muddy edges resting birds included Goosander, Dunlin, Whimbrel and a juvenile Common Knot. Loch Spynie was last on the list with Barn Owls at a nestbox and on the lake Mute Swan, Tufted Duck, Common Teal and good numbers of Little Grebe. On exiting the loch brief views were had of Eurasian Jay and Great Spotted Woodpecker. 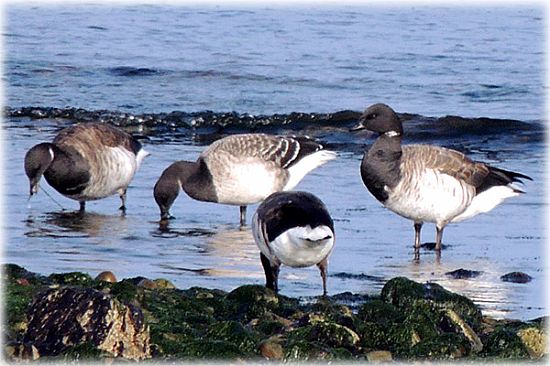 Today we travelled westwards into the vast and sparsely populated Wester Ross. Before turning off onto the Wester Ross coastal trail we had seen a solitary Red Kite and a skein of Greylag Geese. A stop at Achnahalt produced a migrant Willow Warbler but little else of note. In the village of Kinlochewe the trees and bushes held the commoner birds with the addition of Song Thrushes gorging on a rowan tree. Goldcrest, Eurasian Bullfinch and Grey Wagtails were also seen. At Gairloch we picked out a Black-throated Diver, Rock and Meadow Pipits, waders and Eurasian Oystercatcher before heading to Rubha Reidh a remote lighthouse reached by a narrow road. The new owners clearly do not like visitors with keep out signs, padlocked gates and various other negative signs. Non-the-less Black Guillemots were offshore in good numbers, an unusual count of eighty plus birds. Scanning of the sea added Northern Fulmar and high overhead a skein of Pink-footed Geese. Various sites were visited with little luck until we pulled up at Loch Gruinard. This proved to be one of those moments when I found a two White-tailed Eagles being pursued by almost every gull around, female Hen Harrier and a fly-by Merlin. To top this all we added Great and a juvenile Pomarine Skua to end the days birding.

An early start to meet up with Simon the warden at Corrimony. The Black Grouse were harder to find this morning mainly due to weather and them only just returning to the leks. Eventually up to 15 birds were located feeding near the lekking grounds. A flock of Mistle Thrushes included two Redwings which were most likely autumn migrants, although it is possible they may have been more local. We headed back to Dingwall for breakfast and then visits to the academy and park where we saw Chiffchaff and Common Moorhen. Tarbatness was next on the agenda with perfect weather for migrants. A walk around the conifer plantation gave us views of a male Common Redstart, Goldcrest, Garden Warbler plus Yellowhammer and Skylarks in the harvested cereal fields. A short seawatch added Red-throated Diver, Sandwich Tern, Kittiwake and Common Eiders. Lunch was taken in the picturesque village of Portmahomack where a group of Black-tailed Godwits rested on the beach with Ruddy Turnstones and Ringed Plovers. A Northern Wheatear of the Greenland race was also noted feeding among the rocks and sand. Visits to Embo, Loch Fleet and Brora followed with familiar birds being observed including an Osprey feeding on a flatfish. We ended the day at Nigg Bay where the rising tide allowed us to watch Northern Pintail and Common Shelduck.

Headed south today passing through the unattractive town of Aviemore. First stop was Loch Morlich where we quickly found Common Goldeneye and Tufted Duck. A short drive away is the mountain railway. With my birding guide license we took the first train up and walked out onto the stony plateaux. In a short time we were watching displaying Rock Ptarmigan and to my surprise three Red Grouse higher than the ptarmigan!! Also around were Northern Wheatear, Meadow Pipit and a female Merlin following the pipits. Back down the mountain towards Abernethy for lunch. The older pines here were good for Great, Coal and Crested Tits, Eurasian Treecreeper, Grey and Pied Wagtails. The bridge crossing the Spey River added White-throated Dippers and a party of Long-tailed Tits. A drive into the Findhorn Valley was great for the vistas but little in the way of birdlife apart from a pair of Eurasian Kestrels, Common Buzzard and groups of Mistle Thrushes. We ended the day by driving along the Farr Road with sightings of Red Grouse. 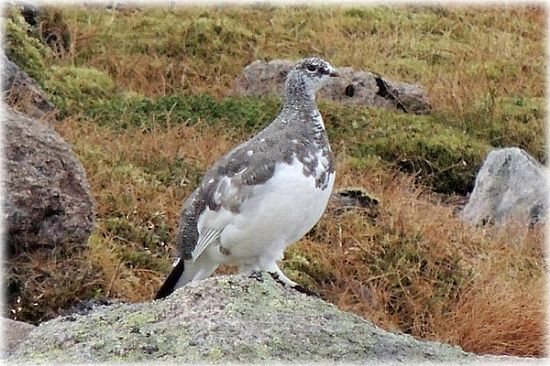 A day in the far north county of Caithness is always a good experience. First stop on the A9 was the coastal village of Helmsdale with its harbour and tree fringed streets. Usual birds around the harbour and bushes so I pushed onto Wick and the river. The muddy margins here attracted Common and a single Jack Snipe, Greenshank, Black-tailed Godwit, ducks and at least four Goosanders. The fog started to lift as we neared Loch Watten with its sizeable Mute Swan flock and rafts of Tufted Ducks. Dunnet Bay was the winner today as the birds were concentrated in the west end and the bay itself. On the beach we marvelled at the variety of birdlife with sightings of Ruddy Turnstone, Red Knot, Bar-tailed Godwit, Sanderling, Ringed Plover, Dunlin, Sandwich and Arctic Terns. Out in the bay up to 30 Red-throated Divers and a close Black-throated Diver in winter plumage, Common Scoter, Razorbills in numbers and a bonus in the form of a first year Little Gull. In the deeper waters feeding Northern Gannets and a pair of Greater Scaup which flew in and then immediately out to sea again. St John’s Loch had Little Grebes and Tufted Ducks plus a Common Coot. As time was pressing I headed to Broubster Leans where we watched at least four Hen Harriers and a group of Twite on a fence line. Travelled back south on the A9 via Glen Loth to the Black Isle and home.

The gardens and feeders at Cygnus House attract a lot of birds with today having around 40 Tree Sparrows. Udale Bay had seen an increase in Eurasian Wigeon numbers plus a slight build up of the wintering wader flock. At Jemimaville we relocated the Red-necked Grebe again with a few Slavonian Grebes for company. Great Scaup numbers were also building up with around 40 birds present. A diversion to Cromarty and South Sutors added little of note so Charonry Point was next on the agenda. Sandwich and Arctic Terns and Razorbill were flying about with a few Northern Gannets and Kittiwakes. The Conon River at Dingwall was next where the summering Canada Geese were present with Greylag Geese and plenty of gulls. Trees and bushes attracted Tree Sparrow and Reed Bunting. The remainder of the day was spent in the Strathconon area where we were entertained by three Golden Eagles an adult and two young giving their distinctive far-carrying calls. This was a fitting finale to an excellent September week in the Scottish Highlands